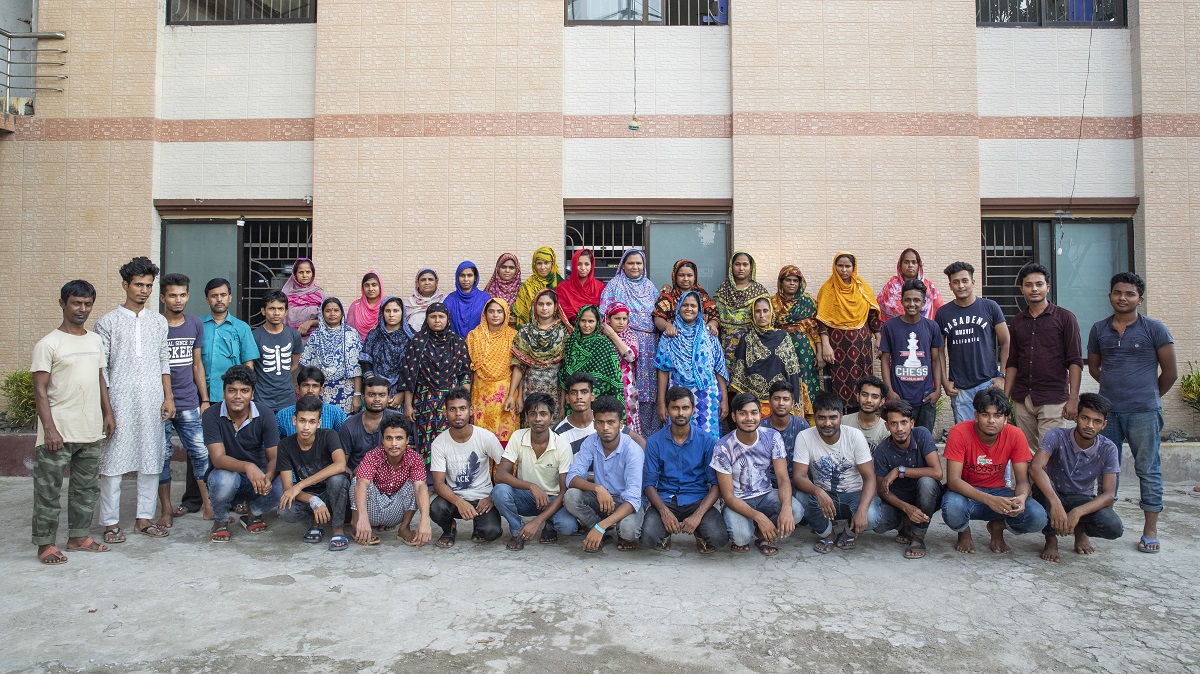 In Bengali, Oporajeo means ‘Invincible’. It was born out of the deadliest garment factory disaster in history. The disaster that led to Oporajeo’s formation occurred at the Rana Plaza building in a district of the capital, Dhaka. This eight-storey commercial building housed a number of garment factories making clothes for major Western brands. On the morning of 24 April 2013 it collapsed, killing 1,136 people. For 11 days, volunteers worked tirelessly to rescue those buried and recover the dead. In the weeks that followed, some of the volunteers set up a group called Mukto Tarunno to raise funds for the rehabilitation of survivors. Looking to the future, the group realized that more could be done than simple charity. Their background in labour rights meant they understood the need to work in solidarity to help people rebuild their lives and this meant finding work for those who had lost their livelihoods. Two months after the collapse, on 24 June 2013, a new kind of factory was created. With the help of labour activists, Oporajeo was established by seven former Rana Plaza workers. Within 18 months, the factory had grown to 33 workers, the majority of them survivors from Rana Plaza. The workers of Oporajeo were labeled owners, and the profits that the factory made were distributed equally among them. Medical support for treatment of physical and mental rehabilitation that resulted from the disaster was established, and a local school was set up for the workers’ children.

Two years later, on the evening of 14 March 2015, a devastating fire ripped through the Oporajeo factory. It destroyed all the sewing machines and 19,000 bags. The main power switch was found to be off, so fire investigators determined that the origin of the blaze could not have been the electrical system, as is common in factory fires. They also found that the back door had been broken in, and fuel from the generator outside had been taken. It was clearly an act of arson.

RISING FROM THE ASHES: Like a phoenix emerging from the ashes, Oporajeo rose again. It is now stronger than ever. Many of the original workers have received compensation for the Rana Plaza disaster and have managed to leave factory work behind and move on to better things. Those that remained helped to relocate the factory to another neighborhood on the far side of Dhaka, 25 miles away from the shady figures suspected of the arson attack. Five years on from the fire, Oporajeo now comprises 280 workers and is well established as a specialist manufacturer of jute products. 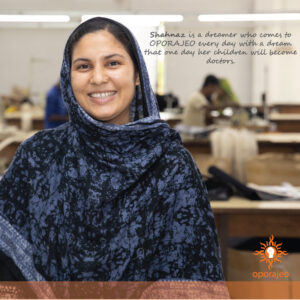 An inspirational worker at Oporajeo Limited. Her dreams are centered around her children. She hopes to support them so they could become doctors. She is 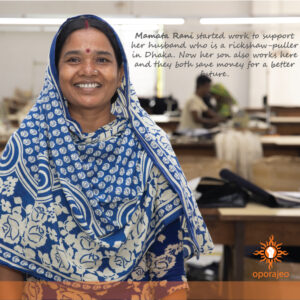 A working mother supporting her family. Rani started working at Oporajeo Limited to support her poor husband, who pulled a rickshaw for a living. Rani 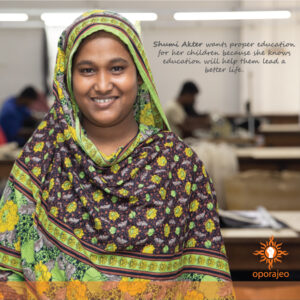 Mother, the heavenly title is precious for Shimu. She has the goal to be a complete mother with her constant journey to provide her children